As Senior Showcase Night came to a close, the atmosphere of nerves and excitement that surrounded Saegertown High began to dissipate. 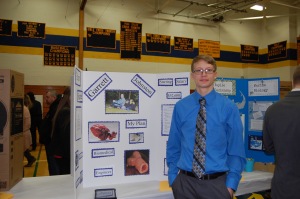 After months of preparation in their English classes, the seniors gathered in the
gymnasium on Jan. 20 to present their future plans to their teachers and peers. The students created a trifold display to present their resume, further plans in education, and future careers. In addition, they created and presented a slideshow to detail in-depth their post-graduation plans.

The project was designed to get the students to “graduate with a plan,” said senior class advisor Mr. Bill Hetrick. Some students had no reservations about their presentations. “I was not nervous to present whatsoever,” said Andrew Flynn, but others like Steve 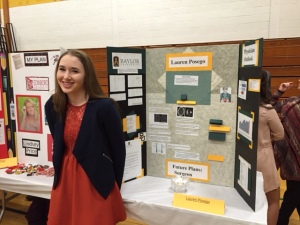 Arblaster said, “I was nervous but prepared.”

Before senior project night, Mr. Hetrick said, “I think they’re going to be awesome,” and he was absolutely right. He reported that he heard nothing but positivity from the students and teachers.

Mr. Adam Horne said, “I thought it was a cornucopia of talent,” and almost all of the students thought they did well. Flynn said, “ I was confident and I did really well like I anticipated.” Brianna Lybarger said, “It kind of makes you realize that you need to be prepared for your future.”