Everyone loves a little bit of ooey and a little bit of gooey, right? Well, even if you don’t, egg yolk is a projected 2017 food trend, according to EAT THIS, NOT THAT. “Once word got out that egg yolks do not, in fact, increase cholesterol levels, people started going crazy with the stuff!”’ said Dana Leigh Smith who wrote the article “17 Food Trends You’ll See in 2017.”

With that knowledge, EAT THIS, NOT THAT predicts egg yolk popularity will only increase in 2017 and honestly I don’t see why not because egg yolk goodness should be part of everyone’s diet in some way or another.

“I like it [egg yolk] because you can put it on burgers and sandwiches, and it still tastes awesome,” said senior Marc Kightlinger. Kightlinger likes his yolks ‘dippy and oozey and yummy’ and he loves putting them on hamburgers because they get “oozey and juicy.”

There are many delicious recipes for egg yolk, but my favorite is the Best Loaded Breakfast Skillet, courtesy of Delish, a well-known recipe website. It’s my favorite because you have chunky crunchy bacon, then soft russet potatoes. Then it hits you. The flavor train of egg yolk hits you. It is a pleasant surprise to know runny yolk goes with bacon and potatoes. Look for more tasty recipes with or without egg yolk at delish.com. And if you have a favorite recipe that incorporates egg yolk, tweet a picture and recipe @PantherPressSHS. 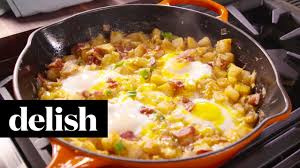