Saegertown students in grades 6-12 are taking to local shooting ranges for the 2019 Trap Shooting Season. The club, which was founded in 2016, has already become wildly popular in Saegertown, with 38 active members this year. Darin Ashbaugh is the head coach and assistants are Richard Johnson, Jason Bailey, John Jordan, and Doug Jordan. One of the team mottos for this year is: “Creating good stories about kids with guns.”

The team participates in the Crawford County Trap League (a traveling league) that includes Maplewood, Cambridge, and CASH. These teams compete on Tuesday nights. Saegertown is currently 2-1, posting wins over CASH (146-121) in week 1 and Cambridge (161-157). They lost a close match to Maplewood on May 7 (166-160). Their next travel match is on May 14 at the Saegertown Sportsmen’s Club.

In addition to the travel team, all members shoot on Sundays for points that may qualify them for competition at the next level, which is the state shoot at Elysburg, Pa. on June 22. Students competing in the state tournament are divided into divisions based on their age and seasonal average. Outstanding shooters then move on to the National Tournament in Mason, Michigan. 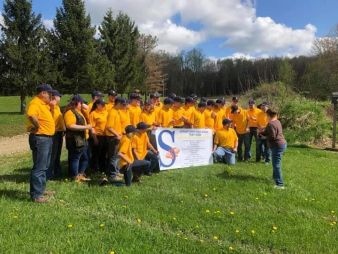 On May 18, team members will participate in a “Shoot for Youth” fundraiser at the Saegertown Sportsmen’s Club. The open registration event will include a day of shooting and a meal. There will also be a Chinese auction, prizes and awards for the best shooters, and other fun activities.  “Shoot for Youth” starts at 10 a.m. and will end at 2 p.m. Fifty birds and a pulled pork d dinner are included for $15. Non-shooters pay $8 for dinner.

The club will also host a pike and panfish fishing tournament to raise money for the program. The fundraiser will be held on June 1 on Conneaut Lake. The entry fee will be $60. For more information,  contact Darin Ashbaugh at (814)-795-2470 or stop into Myers’ Sports Connections in Saegertown.

Lifting today after school. Spread the word.
The first Saegertown Trivia Tournament was a success. Thanks to all the participants and congratulations to Ezra McClymonds and his brother Jared McClymonds for winning first place! See you next time!
See you at 6. You can register at the door. Cost is $2 per team member.
It’s on tomorrow night! Join us in the cafeteria. Doors open at 5:45 p.m. Format will be as follows: all questions will be toss-ups general trivia. Each round will include 10 questions. Teams will write their answers on the answer sheets, and we will score between each round. First round will be warm-up. It will be followed by three rounds of pool play. At the end of the third round, the top 8 teams (total correct for 30 questions)will be seeded and advance through a tournament bracket. All other teams can continue to play for fun until the final round. Prizes will be awarded to the winning team and the runner up. Reminder, cost is $2 per player. Teams are capped at 5 members. If you haven’t signed up, you can register at the door. You will need a team name. Concessions and childcare (children 3 and up) will be available. Proceeds benefit SHS Hi-Q and the Panther Press. Public is welcome. Teams can include students and adults. #trivia #quizbowl
SHS Hi-Q team is at US History Bowl at South Side High School today. #trivia #quizbowl
The Panther Press: Saegertown Jr. Sr. High School's award-winning student newsmedia, Saegertown, Pa. Member of Pennsylvania School Press Association Saegertown Trap Team shooting for success in 2019
%d bloggers like this: